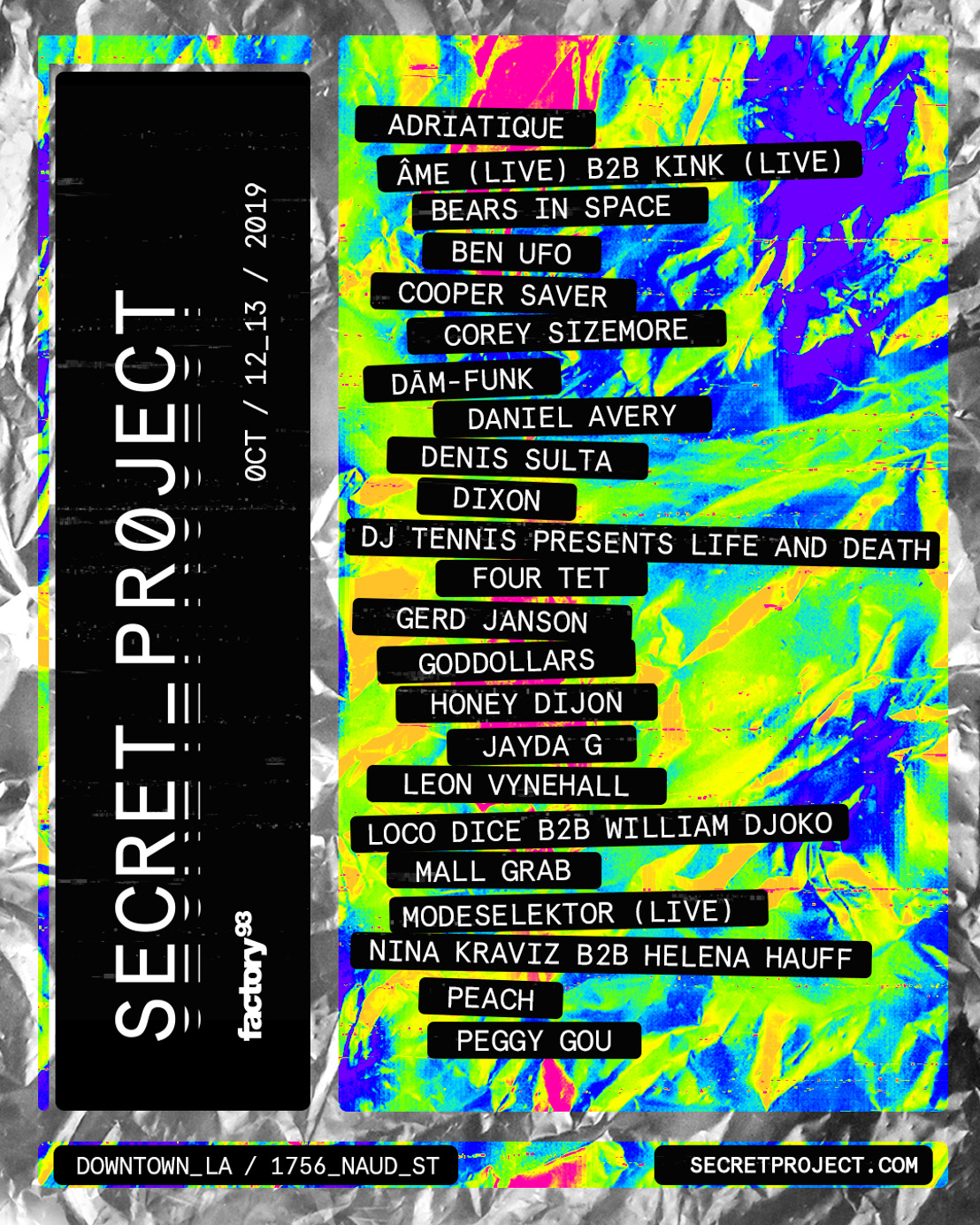 On October 12-13, Secret Project will return to Downtown Los Angeles for the sophomore edition of its cutting-edge music experience. Nestled within the creative hotbed of Chinatown’s Naud Street, the event will once again offer globally leading soundscapes set within one of the country’s most unique urban locales.

Secret Project paired Los Angeles’ tastemaking electronic music scene with some of the world’s best selectors in 2018, uniting a global community and creating a forum to showcase avant-garde and esoteric strains of electronic music in the heart of LA. It was the first event of its kind in the city, and those who attended enjoyed something unique in Los Angeles: a city-center music experience that has long been typically associated with urban centers like Berlin, Amsterdam, Detroit or Barcelona. Secret Project went on to win win XLIVE’s “Best New Festival” award for its 2018 debut.

The brooding underbelly of the global scene will be on full display at Secret Project once again, spearheaded by a back-to-back showing from Nina Kraviz and Helena Hauff as well as a full-day takeover by DJ Tennis’ Italian born Life and Death imprint. Peggy Gou and Dixon will also make their much anticipated return to Naud St.

The rarities continue with Frank Wiedemann representing Âme, four years since his last visit to the West Coast as part of the project. Wiedemann will be joined by fellow innovator KiNK for an entirely live back-to-back set. Groundbreaking duo Modeselektor, will also bring their riotous and raucous live show to Secret Project.

Tying the roster together are the local LA legends who have fought tirelessly to develop LA’s underground, and are themselves on their way to international stardom. Lights Down Low co-founder Corey Sizemore has been tapped once more for his polished selections, as has Far Away’s Cooper Saver for his first time. While Bears In Space and Goddollars from A Club Called Rhonda, renowned as beacons of inclusivity and leaders in bringing LGBTQ back to the forefront of the dance community, are crucial names on the Secret Project roster.

In line with the creativity of its urban home, Secret Project will fuse world-class music curation with local street art in addition to bespoke craft cocktail programming and a wide-reaching sampling of the city’s multinational culinary mixing pot. Guests can expect a reimagined Spring Street stage in addition to the towering industrial container design that became an aesthetic flagship for the festival last year.